The patient medical records were sent to the State Archives in Harrisburg, but were destroyed in a flood during Hurricane Agnes in the 1980’s. But there are several things you can try.

PA. STATE ARCHIVES
About 9000 patient index cards covering the period of roughly 1921 to 1931 were found in the attic at the san. They currently are held at the Pa. State Archives in Harrisburg. These cards measuring 3″ x 5″ were issued for tuberculosis patients at the Cresson Sanatorium in Cambria County.
The front side of the card lists admission date, case number, discharge number, clinic number, diagnosis, patient name, number of admissions, patient home address, religion, occupation, age, place and date of birth, citizenship, length of residence in Pennsylvania, reason/condition/date of discharge, number of clinic visits, and total days in the Sanatorium.
The reverse side of the card lists clinical condition, patient height, admission and discharge weight, weight gain or loss, father’s name and birthplace, mother’s name and birthplace, patient reference and their relation to patient, reference address, and any remarks.
These index cards do contain some medical information, so HIPAA privacy rules do apply. However, the general rules are as follows:

1. If the patient died more than 50 years ago, anyone may obtain a copy of the complete index card.
2. If the patient died less than 50 years ago, anyone may obtain a copy of the complete index card, but the medical information will be blacked out.
Note that there will be a charge to locate, reproduce and mail copies of the index cards. Call the State Archives to determine applicable fees. The current contact for these cards is:
Jonathan R. Stayer
Supervisor of Reference Services Pennsylvania State Archives 350 North Street I Harrisburg, PA 17120-0090 Phone: 717.783.2669
E-mail: jstayer@pa.gov
PA. DEPARTMENT OF HEALTH
There is one other option to explore. Index cards on TB patients were often kept by the Pa Dept of Health. If you know what county the patient was living in when they were diagnosed with TB, then you can call the Health Dept office at that county seat and see if they have such a record. I lived in Towanda, the county seat of Bradford County, and obtained my index card from them. You can see my index card below. Click on the following link to see a listing of County Health Department phone numbers by
county:
http://www.health.pa.gov/Your-Department-of-Health/Offices%20and%20Bureaus/State%20Health%20Centers/Pages/default.aspx#.VfhWxo0o4dd I hope this proves helpful in your search for information. Chuck Felton 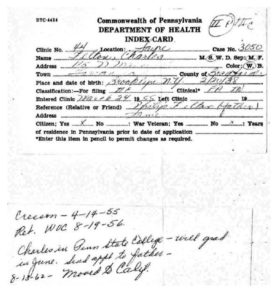 The date of 3-24-55 on the above card was when I entered the Robert Packer Hospital in Sayre, Pa. for further tests to officially confirm the initial diagnosis of TB based on my chest x-ray. The 4-14-55 date is when I entered the Cresson sanatorium and 8-19-56 was my release date. I believe the WDC in front of my release date stands for “With Doctor’s Consent”. They even have the correct date of when I moved to California, 8-13-62.

Early Treatment: The most common early treatments of tuberculosis were rest, fresh air, sunshine, good food, and competent medical supervision. Lung Collapse Therapy
A successful collapse of the lung facilitated healing by resting the affected area. Collapse therapy was likened to putting a splint on a broken leg to immobilize it.
Shot Bags – An early form of non-invasive lung rest treatment for patients who had infections of both lungs was the “shot bag” method. A bag containing one pound of shot was placed on either collarbone of the patient and the amount of shot increased 4 or 5 ounces each week until the patient was carrying 5 pounds of weight on the upper part of each lung. This restricted the excursions of the lungs, made them quiescent, taught correct breathing and produced partial rest for the lungs.
Artificial Pneumothorax – compression of the affected lung by the introduction of air into the pleural cavity, between the chest wall and the lung. The air would be absorbed and refills were usually given once a week. Pneumo was designed to be continued anywhere from two to four years or more.
Bilateral Pneumothorax – compression of both lungs by pneumothorax. In this procedure, a portion of both lungs were collapsed and patients, though short of breath, could lead moderately active lives.

Interpleural Pneumolysis – cauterizing of adhesions between the chest wall and lung. The adhesions prevented the lungs from collapsing satisfactorily.

Thoracoplasty – removal of the ribs on one side of the thorax to accomplish a permanent collapse of the diseased part of the lung. This surgery was necessary when pleural adhesions prevented the use of pneumothorax.

Phrenicotomy – Cutting or crushing of the phrentic nerve on one side causing elevation of the corresponding diaphragm, thus compressing the lower part of the lung on that side.

Plombage – Inserting porcelain balls into the thoracic cavity to collapse he lung beneath. It was a one-time procedure unlike pneomothorax which had to be repeated.

Lung Surgery: Surgical resection of infected lungs was not possible in the 1940s and 1950s, because the science of anesthesia at the time was not sufficiently advanced to permit surgery on the lungs of an anesthetized patient. After solving this problem, the following surgeries were performed:

Lobectomy: Removal of the affected lobe of a lung.

Drugs: Effective drugs were not introduced until the 1950’s. The various drugs developed and the combination in which they were used meant that by the 1980’s the cure rate was 98%. Streptomycin, developed in 1944, was the first drug used against TB. It was successful at first, but the TB bacillus soon developed resistance to the drug. Fortunately, European scientists in the late 1940’s developed a drug named para-aminosalycilic acid (PAS). By using the two drugs in combination they prevented drug resistance from occurring and they proved an effective cure.
But there were drawbacks. Streptomycin was given by injection and often was painful while PAS was given in large quantities and could be nauseating. In 1952 a new drug named Isoniazid was developed. By combining all three drugs, treatment length could be reduced to 18 months. By the mid 1960’s the effectiveness of these drugs and newer drugs spelled the end of the sanatorium system, with all of them being closed or converted to other uses. (See History 1 Page write-up of Sir John Crofton who was responsible for breakthrough research that led to the first effective combined treatment regimen for TB.)

CRESSON CHILDRENS SONG “Spunk” was a monthly magazine published by the Pennsylvania State Tuberculosis Sanatoria. The following poem/song was written by a young patient at Cresson circa 1916. C is for the Cure that makes us better; R is for the Rules we must obey; E is for the Eats which fill our stomachs; SS are for the SongS learned in our play; O is for the Outlook from our windows; N is for the Nurses sweet and gay- Put them together they spell Cresson, Where we children dearly love to stay. M.B. , age 13, one of the Kiddies.
“SPUNK” (From a 1911 Article) Spunk,” the little monthly periodical published by the patients of the Sanatorium has proved a valuable agency in keeping up the spirits and aiding the recovery of the patients. A State Senator in communication to the editor truthfully says: “It is comparatively easy to do one’s duly when the eyes of many are upon us— many
frequently act fearing they would otherwise be thought cowards, but to do a brave thing when few know of the sacrifice is really greatness and the prompting to do it, and the act of doing it are the property of the soul.” It is an ably edited journal, with many interesting contributors and is a benefit alike to those who write and those who read. 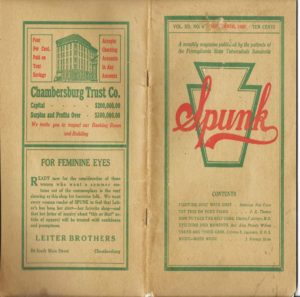 An internet search on the word preventorium reveals many newspaper articles, medical journal papers and books on the subject. Several good examples are shown on the “Favorite Links” page.
American Public Health Association 1930 article “What Is A Preventorium” is at http://www.pubmedcentral.nih.gov/pagerender.fcgi?artid=1555984&pageindex=1
http://www.ajph.org/cgi/reprint/15/9/764.pdf Sun Worshipping In Pennsylvania Kids Canada’s Role In Fighting TB and Preventorium Care is at http://www.lung.ca/tb/tbhistory/prevention/preventorium.html For many photos of children at a preventorium, go to http://public.fotki.com/Preventorium/preventorium-photos/ For an article in the Altoona Mirror Dec. 8, 1921 entitled, “CRESSON SANITORIUM CHILDREN APPEAL FOR 1921 SANTA CLAUS” go to http://camgenpa.com/news/1921AM.html An excellant book on this subject is entitled “Saving Sickly Children: The Tuberculosis Preventorium in American Life, 1909-1970” by Cynthia A. Connolly 182 Pages Published 2008