When the US Census was taken in 1850, there were approximately 128 African Americans living in Cambria County. By the 1860 US Census, that number had dropped to 106. This decline in residents could be attributed to the Fugitive Slave Act of 1850 which allowed for the capture of any Black person, whether free or escaped, to be captured and sold back into slavery.

By May of 1863, there were so many freed Blacks volunteering to serve in the Union army that the government established the Bureau of Colored Troops. When the call for troops was announced, there were several from the Johnstown area that rushed to join. Let’s meet them.

Two who joined in 1863 were John Brown and Orange Dorman, both of the Laurel Hill Settlement in Lower Yoder Township. Both men walked over the mountain to Fairfield Township in Westmoreland County to join the forces of Col. George Covode. Eventually, Covode’s recruits become a company within the 4th Pennsylvania Cavalry (64th PA Volunteers). John served in Company H of the 4th PA while Orange Dorman, who was 50 years old at the time, joined as a cook.

The 4th PA Cavalry was organized in Harrisburg, Philadelphia and Pittsburgh beginning in 1861 and was engaged in many of the war’s most important battles including the Peninsula Campaign, Antietam, Gettysburg, the Wilderness Campaign, and Appomattox.

Another resident of the Laurel Hill Settlement, John E. Smith, joined the 3rd Regiment, US Colored Troops (USCT) when they were forming in Philadelphia between August 3-10, 1863. Most of the Colored Troops were trained outside Philadelphia at Camp William Penn. The 3rd Regiment saw action in the south, namely, the sieges of Forts Wagner and Gregg, at Morris Island, SC. This is the same engagement in which the 54th Massachusetts fought, and which was immortalized in the movie, “Glory.” John is eventually mustered out of the army in 1864. When John passes away in 1895, his funeral is organized by Emory Fisher GAR Post 30 where he, John Brown and Orange Dorman were members.

When Orange Dorman dies on March 8, 1900, the Bedford Gazette, ran his obituary.

Orange H. Dorman, colored, a native of Morrison’s Cove, died at his home in Morrellville on March 8. He served in Uncle Sam’s army during the civil war.

The deceased was not a slave, but his wife, Jane, who was bred in “Old Virginny,” spent several years under a southern master. She gained her freedom by the aid of the projectors of the famous “underground railway,” who spirited her over the Mason and Dixon line. She came to this county, where she was married to Mr. Dorman.

The two sons of the decedent, Jacob and George, “followed the flag.” Jacob was killed by the blowing up of a gunboat on the James river, in virginia, in 1864. It was a federal boat and was destroyed by the rebels. George served a number of years in the regular service, roughing it with the Forty-first Pennsylvanians in the southwest. In a fight with the Indians on the Rio Grande river, in Texas, in 1884, he was wounded in the hip and still carries the ball as a memento of the engagement.

It is here that we learned that both of Orange’s sons also served in the Civil War and the Indian Wars in Texas.

Both John Brown and John E. Smith are buried at the Laurel Hill Settlement. Orange Dorman and his son George are buried at Sandyvale.

Another member of the 3rd Regiment, USCT, was Johnstowner, John C. Plowden. John was in Company E of the 3rd. After the sieges of Forts Wagner and Gregg in South Carolina, the regiment was moved to Florida where it remained throughout the war until it was mustered out on October 31, 1865. John is buried in the Soldier’s Circle in Grandview Cemetery.

John H. Farley, answered the call and enlisted with the 127th USCT Co. A. This unit also trained at Camp William Penn near Philadelphia. This unit was involved with the siege operations against Petersburg and Richmond, VA. This unit was also at Appomattox Court House on April 9th, 1865 when Lee surrendered the Army of the Potomac. From Virginia, the unit was moved to Brazos Santiago, Texas in June and then to various points along the Rio Grande until the unit was mustered out on October 20, 1865. John H. Farley, is interred in the Soldier’s Circle in Grandview Cemetery.

Finally, Andrew Malatt, enlisted in Company G with the 24th Regiment, USCT Infantry. The 24th mustered late in the war effort enlisting troops from January 1-March 30, 1865. At Point Lookout in Maryland, the unit guarded prisoners until July 6th after which it was moved to Richmond where it was stationed until it was mustered out October 1, 1865. Andrew is interred in Sandyvale.

A Soldier’s Contribution After the War

One of those veterans was Charles Washington Cook. In the war, Charles was a corporal and served in Company D, 39th Infantry USCT. In the 1870s, William H. Rosensteel operated a tannery in Woodvale. This was a large operation requiring much labor. 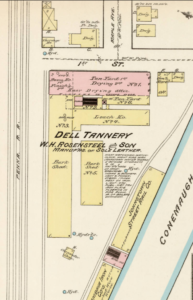 In 1873, Rosensteel when to Maryland to recruit Black workers for his tannery. It was on this recruiting trip when Charles W. Cook and other Black men returned to Johnstown for work. These new Johnstown citizens, being members of the AME Zion faith, needed a place to worship. To help, Rosensteel allowed them to worship in the loft of his tannery. He also helped them secure a location for their church. In 1875, Cambria Iron helped the group by selling them a plot of land for the minimal fee of $1.00. The Cambria Chapel AME Zion Church was originally located at Napoleon and Dibert Sts, but was moved to its present day location in 1877 and became known as First Cambria AME Zion Church. It was destroyed in the 1889 Flood, but rebuilt. 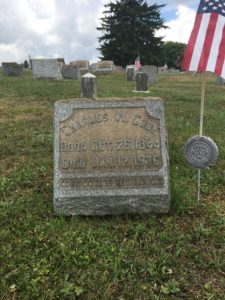