By the 1880 Census, there are over 190 African-Americans living in Johnstown. Most are working for the Cambria Iron Company making iron rails. The population in Johnstown remained relatively stable until the next wave of migration by African-Americans hit right before World War I and then after the war the second wave came in 1923 and 1924. The primary reason for these waves of emigration between 1918 and 1924 was because of deteriorating economic conditions in the south due to a boll weevil infestation that destroyed the cotton crop. It was also during this second emigration that the Johnstown branch of the National Association for the Advancement of Colored People was formed in Johnstown. The creation of this branch of the NAACP will become important in the turbulent years to come.

African-Americans coming to Johnstown during that time were living in the neighborhoods of Minersville, Rosedale, Franklin, and Conemaugh. These neighborhoods were close to where the majority of men were working, which was at the Bethlehem mills. At this time, African-Americans who worked in the mills were given all the dirtiest jobs such as shoveling coal into the furnaces or removing coke from the ovens. There were however other opportunities and many men and women worked as porters for the railroad, or served as drivers for families living in Westmont, were housekeepers, or worked in area restaurants and kitchens. The population of African-Americans in Johnstown has never exceed 3,000.

It wasn’t until the Rosedale incident in 1923 that national attention would once again be focused on African-Americans in Johnstown. It all began when Bethlehem Steel not entirely satisfied with its black labor force began importing trainloads of Mexicans to work in the mill. This influx strained Johnstown’s resources. Blacks at this time were housed in several parts of the city, but it was the grossly inadequate quarters in the Rosedale section that would prove to be problematic. Bethlehem Steel owned most of the property including a number of bunkhouses for male laborers. Living conditions were deplorable.

On August 30th once again racial problems would come to a head. In an incident involving a traffic accident gone terribly wrong, a black man named Robert Young under the influence of alcohol, shot and wounded a police officer. Realizing he shot an officer, Young ran into a nearby shed where a gun battle ensued in which Young and two police officers were killed and several were wounded with one dying later. This incident put the white community on the defensive and proved to be an ideal opportunity for the Klu Klux Klan to stage a 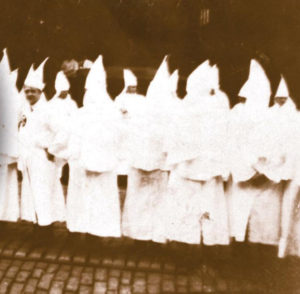 demonstration by burning crosses on a nearby hill. Shortly thereafter Mayor Joseph Cauffiel ordered all blacks who had lived less than seven years in the city to immediate leave, Again this violation of civil rights was corrected, only this time by the Governor of Pennsylvania who, responding to demands for action from the Johnstown branch of the NAACP, intervened and pledged that “the whole power of this commonwealth will be used if necessary to maintain constitutional rights.” When all was said and done, Mayor Cauffiel was voted out of office, several hundred blacks did leave the area, and race relations remained tense for years afterward.